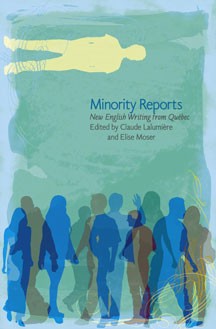 In her spring 2012 cover story for the Montreal Review of Books, Marianne Ackermann begins:  “In any era, literary life tends to congregate around poles. In the early twentieth century, Paris was the magnet for North-American writers. Montreal drew Anglo-Canadians in the 1940s, a role this city once again plays for the young and mobile.” If we restrict our examination of the literary map to Canada, some might argue that the most obvious city for a young Anglophone writer to migrate to is Toronto (though others might say this is a tired assumption). But if Montreal does continue to draw young writers – even the ones writing in English – what kind of writing are they producing?

Minority Reports: New English Writing from Quebec offers readers a slice of the local English literary scene. The fourth anthology of its kind published by Véhicule Press, the book is a collection of stories written by the first-prize winners, second-prize winners, and honourable mentions of the last three annual Quebec Writing Competitions. The competition partners not only the CBC and the QWF, but also Maisonneuve magazine, making it one of the most prestigious English-language competitions in the province. There’s also a nice sum of prize money involved. Although the competition welcomes fiction and non-fiction, the stories aren’t identified as one or the other in the book, which may strike some readers as an oversight.

The collection boasts an overall high quality, and offers a wide range of content, style, and breadth. With 1,200 words to work with, the zanier stories, the ones that don’t take themselves too seriously, work best. Stories like Claire Sherwood’s 2011 “Rat Catcher,” in which a buxom woman arrives in small-town Yukon to make a buck, or Anna Leventhal’s 2008 “The Yoga Teachers,” which follows a reluctant young girl to her dance class on a special day.

A quick look at the table of contents yields a few names that are probably familiar to someone who pays attention to the English-language writing scene in the city. Short bios at the back of the book reveal a motley cast of writers and part-time writers, including students (from writing programs or otherwise), parents, a few doctors, and many people who have migrated to the city. The impressive diversity of the bios suggests something about Montreal and its ability to foster creativity. It reflects a certain casualness in Montreal that gives people the flexibility to study or make a living while pursuing their writing, which seems to be the case for many of the winning contributors in this collection. Maybe that’s a start to understanding what draws English-language writers to Montreal, and gives this collection its distinct voices.

For more information on the 2012 Quebec Writing Competition, visit the CBC’s website. Deadline is May 1, 2012.mRb