Seen With the Heart

Poems to See By

A review of Poems to See By by Julian Peters

In Poems to See By, a collection of graphic poetry interpretations from Plough Publishing House, Julian Peters looks at the art of poetry and gifts us with his thoughtful visual translations, allowing us to see them through a new lens.

It’s clear to see why these works have been used in classrooms, as Peters speaks about in his preface. Whether or not his representations of these poems are what we ourselves see when we read them, they give us a new perspective, picking them up and showing them to us from different angles.

Peters conveys the spirit of the poems he covers using an unbelievable range of styles, from line art to full-colour paintings, from gestural figures to vibrant cartoons reminiscent of Michel Rabagliati or Guy Delisle. It’s a real showcase of his skill and versatility as an artist; I could see many of the poems represented here as their own, expanded stand-alone books (“There Have Come Soft Rains” by John Philip Johnson with its powerfully melancholic blues, for example, or the crisp, watercolour world-building Peters employs in his version of Robert Frost’s “Birches”).

There were a few instances where I saw this diversity of style as somewhat surface-level; or rather, there were times I wished the diversity of Peters’ pen extended beyond the visual and into the curatorial. These are classic and important poems for sure, but I believe Poems to See By would have been a stronger showcase with a few more contemporary pieces by authors from different backgrounds. Not having more poems from nonwhite authors, and in particular the lack of Indigenous representation, is a very felt absence (this last point feels important in part due to Peters’ inclusion of Carl Sandburg’s “Buffalo Dusk,” one I found to be a rare misstep in the collection). 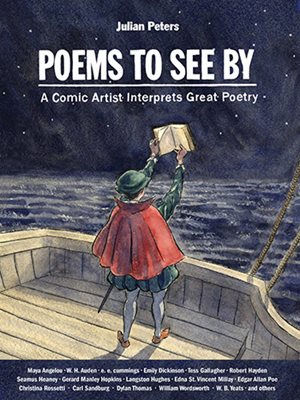 Where Peters is at his strongest here is when the poems shake off their original forms, allowing for a break from the more traditional panel structure employed throughout the majority of the book. Specifically, his visual interpretation of Maya Angelou’s “Caged Bird” – a full-colour masterpiece made to mimic the appearance of a quilt – is striking and memorable, leaving you wandering its fabric and patterns alongside Angelou’s timeless writing.

This brings me again to the book’s preface, one I found evocative and astute: Peters is adept at describing the poetry inherent in the comic format, and the visuals that the vivid language of poetry can conjure in our minds. He expertly draws the connections between the two forms, and in doing so makes the reader consider what a comic can be, and the ways in which it already is poetic. In so successfully connecting the dots, however, Peters left me wanting more from his own expressions of these poems. I can’t help but think of how much more blending of formats he could invoke, of the ways he could bring in more elements of comics, such as dialogue bubbles or symbols (I’m thinking here of the wordless classic The Arrival by Shaun Tan) to create his own separate version of the poem, still seen alongside the original work itself but more experimental in form.

If I sound critical of Poems to See By, it’s only because it is such a compelling project, and one whose preface and methodology brought up many questions for me. Good artists do that, engender curiosity in their audience.

Julian Peters sees with his heart, and it’s clear in these loving, deliberate works. “The truth is, I did it all for love of beauty,” he says in his preface, and it is this love of beauty, this curiosity of spirit, and appreciation for the work he covers, that makes Poems to See By both moving and meditative. Peters is drawing love letters to poetry, and in the process sparking an interdisciplinary conversation, and I hope he never stops.mRb

Marcela Huerta is the author of Tropico, a collection of poetry published by Metatron Press in 2017. She is the Poetry Editor at carte blanche magazine.